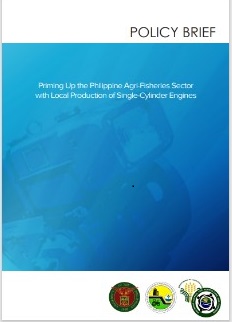 Likewise, power is required for performing various stationary operations, i.e., irrigation water pumping, grain threshing, shelling, cleaning, drying and milling. Numerous studies have shown that the level of agricultural productivity is directly related to the level of available farm power. All agricultural engines currently available in the Philippines are imported units from Japan, China, India, Vietnam and other countries. Many of these engines are of good quality and imported by reputable local agricultural machinery distributors that provide after sales service and customer support nationwide. There have been reports that small but significant volumes of used engines managed to reach Philippines. These engines were less expensive than legitimately imported units. The quality, reliability and after sales support of these engines are not fully guaranteed. In the past, efforts have been made towards local prototyping and manufacturing of agricultural engines which were mostly initiated by the private sector. The near successes and failures of the single cylinder production in the country can be attributed mainly to the lack of government program and support system on engine local production. This study aimed to understand in more operational terms the policies that may be needed to sustainably support the local production of the SCE in the country. The results would be useful in addressing economies of scale, technical capability, production cost, market and institutional arrangements faced by the industry. Outputs of this research would serve as inputs in the planning and formulation of policies for the establishment of the industry in the country.