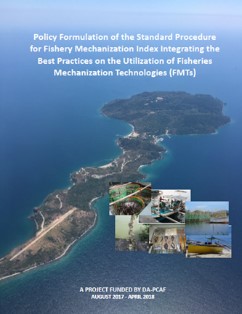 Many of the ASEAN countries are among the highest producers of fish and fishery products in the world. ASEAN has been a major producer of fish and other fisheries products which accounted for almost a quarter of global fish production with the combined fish products of the ten ASEAN countries. Although mechanization plays an important role in the development of the fishery sector to deliver products for human consumption, its indicative measure of the level of mechanization has yet to be determined.

The project was conducted to determine the current and best practices of utilizing Fishery Mechanization Technologies (FMTs) by selected ASEAN countries. The study also aimed   to document the methodologies utilized by the selected fish producing ASEAN countries in determining the fishery mechanization index (FishMI) as an indicative measure of the level of mechanization. The study documented the common production and capture fisheries practices of fisherfolks including the government support system to the fishery sector in the selected ASEAN countries including the Philippines. The project also focused on the identification of the gaps and interventions on fishery mechanization that would contribute to the development of the country’s fishery industry for food security and sustainability. The FishMI envisioned to aid policy and decision makers in making well-informed decisions for the acquisition, distribution, and adoption/utilization of FMTs to accelerate fishery development in the ASEAN region.